Sophie Sparkes (1996) is a UK-based composer whose compositional output ranges from choral to instrumental works, chamber opera, music for theatre, electro-acoustic composition, sound installations and music videos. Sophie currently studies composition with Eugene Birman at the University of Oxford, having previously studied at the Junior Royal Academy of Music and The Purcell School for Young where she won the Tim Stevenson Award for outstanding young composer 2014.

Sophie’s work has been premiered in venues including the Saatchi Gallery, St Martin-in-the-Fields and The Royal Academy of Music by ensembles including The Aurora Orchestra, The BBC Singers and Music Off Canvas. Commissions include a Pop Up Opera, Chuggers, for Tête à Tête: The Opera Festival 2015, and a work for the 20×12 Cultural Olympiad with Sound and Music. 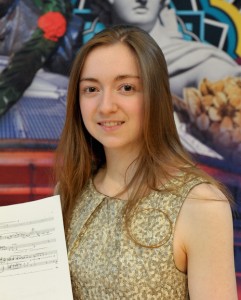