Gregorčič was born in the small mountain village of Vrsno above the river Soča in the County of Gorizia and Gradisca. In 1851, he attended primary school in Libušnje, but was in 1852 sent to school in Gorizia. After finishing high school he entered the seminary in Gorizia. He was ordained on 27 October 1867 and became a vicar in Kobarid in September 1868. There he continued with his literary work and together with his friend Ignacij Gruntar in 1871 founded a public reading room.

His poems, such as the ode “Soči” (“To the Soča”), were patriotic in nature, but he also wrote love poems, such as Kropiti te ne smem (“I am not allowed to bless you”), and worked in other poetic genres. His most important works were Človeka nikar, Ujetega ptiča tožba (“The Snared Bird’s Lament”), Moj črni plašč, Veseli pastir, Nazaj v planinski raj, Oljki.
Source: Wikipedia

Gregorčič’s most famous poem ‘Soči’ – ‘To the Soča’- describes the progress of the river Soča from its mountain source to the plains of Trieste. At the beginning the turquoise water is fast and vigorous, “like the walk of the highland girls”, and its refrain runs, “You are splendid, daughter of the heights!” (“Krasnà si, hči planin!”). But when the river reaches the exposed plain it grows sluggish, sensing its vulnerability. Gregorčič foresaw a day when it would be filled with blood, surrounded by a “hail of lead”, and would need to burst its own banks to “draw the foreigners ravenous for lands to the bottom of your foaming waves.”
Source: Janet Ashton, British Library blogs 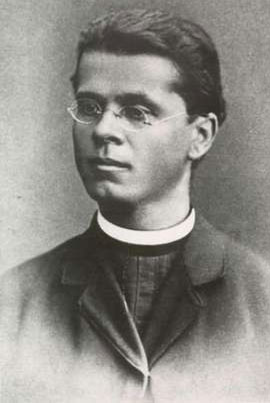