(6 or 16 September 1893 – 17 December 1944) was an English writer, known as a war poet of World War I, and a playwright. He was educated at Winchester College and Trinity College, Oxford.

He served in the Royal Artillery as an officer in 1914, in the fighting at Loos and the Somme. He was invalided out in 1916, after suffering from shell shock. He began to give poetry readings, in 1917. In 1918 he was a member of an official British propaganda mission to the USA.

After the war he moved in social circles in London; Aldous Huxley became a long-term friend and correspondent. Nichols wrote several prose fictions, including The Smile of the Sphinx, a fantasy set in the Middle East and Golgotha & co., a satirical fantasy featuring the Wandering Jew, the return of Christ and a future war. These fictions were collected in Nichols’ book Fantastica.

He lived in Germany and Austria in 1933–34. He then settled in the south of France until he left in June 1940. He is buried at St Mary’s, Lawford, Essex next to the family home, Lawford Hall.

On 11 November 1985, Nichols was among 16 Great War poets commemorated on a slate stone unveiled in Westminster Abbey’s Poet’s Corner.[2] The inscription on the stone was written by a fellow Great War poet, Wilfred Owen. It reads: “My subject is War, and the pity of War. The Poetry is in the pity.” 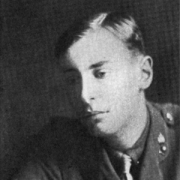