Robert Laurence Binyon was born in Lancaster, Lancashire, England. His parents were Frederick Binyon, and Mary Dockray. Mary’s father, Robert Benson Dockray, was the main engineer of the London and Birmingham Railway. The family were Quakers.

Binyon studied at St Paul’s School, London. Then he read Classics (Honour Moderations) at Trinity College, Oxford, where he won the Newdigate Prize for poetry in 1891.

Immediately after graduating in 1893, Binyon started working for the Department of Printed Books of the British Museum, writing catalogues for the museum and art monographs for himself. In 1895 his first book, Dutch Etchers of the Seventeenth Century, was published. In that same year, Binyon moved into the Museum’s Department of Prints and Drawings, under Campbell Dodgson. In 1909, Binyon became its Assistant Keeper, and in 1913 he was made the Keeper of the new Sub-Department of Oriental Prints and Drawings. Around this time he played a crucial role in the formation of Modernism in London by introducing young Imagist poets such as Ezra Pound, Richard Aldington and H.D. to East Asian visual art and literature. Many of Binyon’s books produced while at the Museum were influenced by his own sensibilities as a poet, although some are works of plain scholarship – such as his four-volume catalogue of all the Museum’s English drawings, and his seminal catalogue of Chinese and Japanese prints.

In 1904 he married historian Cicely Margaret Powell, and the couple had three daughters. During those years, Binyon belonged to a circle of artists, as a regular patron of the Wiener Cafe of London. His fellow intellectuals there were Ezra Pound, Sir William Rothenstein, Walter Sickert, Charles Ricketts, Lucien Pissarro and Edmund Dulac.
Post-war life

After the war, he returned to the British Museum and wrote numerous books on art; in particular on William Blake, Persian art, and Japanese art. His work on ancient Japanese and Chinese cultures offered strongly contextualised examples that inspired, among others, the poets Ezra Pound and W. B. Yeats. His work on Blake and his followers kept alive the then nearly-forgotten memory of the work of Samuel Palmer. Binyon’s duality of interests continued the traditional interest of British visionary Romanticism in the rich strangeness of Mediterranean and Oriental cultures.

In 1931, his two volume Collected Poems appeared. In 1932, Binyon rose to be the Keeper of the Prints and Drawings Department, yet in 1933 he retired from the British Museum. He went to live in the country at Westridge Green, near Streatley (where his daughters also came to live during the Second World War). He continued writing poetry.

In 1933–1934, Binyon was appointed Norton Professor of Poetry at Harvard University. He delivered a series of lectures on The Spirit of Man in Asian Art, which were published in 1935. Binyon continued his academic work: in May 1939 he gave the prestigious Romanes Lecture in Oxford on Art and Freedom, and in 1940 he was appointed the Byron Professor of English Literature at University of Athens (he was succeeded by Lord Dunsany, who held the chair in 1940-1941). He worked there until forced to leave, narrowly escaping the German invasion of Greece in April 1941

Binyon had been friends with Ezra Pound since around 1909, and in the 1930s the two became especially close; Pound affectionately called him “BinBin”, and assisted Binyon with his translation of Dante. Another protégé was Arthur Waley, whom Binyon employed at the British Museum.

Between 1933 and 1943, Binyon published his acclaimed translation of Dante’s Divine Comedy in an English version of terza rima, made with some editorial assistance by Ezra Pound. Its readership was dramatically increased when Paolo Milano selected it for the “The Portable Dante” in Viking’s Portable Library series. Binyon significantly revised his translation of all three parts for the project, and the volume went through three major editions and eight printings (while other volumes in the same series went out of print) before being replaced by the Mark Musa translation in 1981. At his death he was also working on a major three-part Arthurian trilogy, the first part of which was published after his death as The Madness of Merlin (1947).

He died in Dunedin Nursing Home, Bath Road, Reading, on 10 March 1943 after an operation. A funeral service was held at Trinity College Chapel, Oxford, on the afternoon of 13 March 1943.

There is a slate memorial in St. Mary’s Church, Aldworth, where Binyon’s ashes were scattered. On 11 November 1985, Binyon was among 16 Great War poets commemorated on a slate stone unveiled in Westminster Abbey’s Poets’ Corner. The inscription on the stone quotes a fellow Great War poet, Wilfred Owen. It reads: “My subject is War, and the pity of War. The Poetry is in the pity. 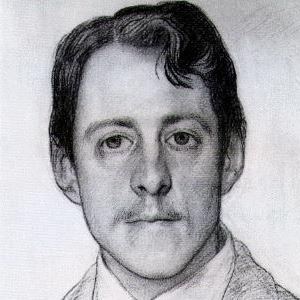