Milutin Bojić is the most famous of the many Serbian writers, poets and painters to die in World War I. In his brief life he wrote works that reflect two major themes: the Serbs’ powerful national pride and their agony during the disastrous war. Even more so than his plays and epics, the war lyrics in”Pesme bola i ponosa” (Poems of Pain and Pride), published in 1917 in Thessaloniki, made him a popular war poet. His personal suffering seemed to embody Serbian history at that juncture of greatness and disaster.

Milutin Bojić served in the Balkan wars of 1912 and 1913 and First World War, first as a war correspondent of “Pijement”, a daily newspaper published from 1911 to 1915, and at the outbreak of World War I he joined the army. During this period he served as a military mail censor and participated in the retreat of the Serbian Armed Forces in the winter of 1915-1916.

After the Serbian army’s retreat through Albania (World War I) in winter of 1915-1916, the survivors who reached the Adriatic coast were transported to Corfu by French, Italian and other allied ships. Here and in the neighbouring island of Vido many of them died of diseases contracted after trekking across the treacherous, snow-covered, rocky mountains. They were buried at sea.

Bojić survived the Serbian army’s retreat through Montenegro and Albania and the desperation of Corfu, and proved his worth as a poet a year or more before his untimely death. Many of his poems were written while he was recuperating in the hospital. And yet in the end, he succumbed to tuberculosis in Thessaloniki. “Our church bells toll dead instead of hours,” he wrote of seeing his countrymen dying around him. At the time of the retreat Bojić had been working on an epic poem, “Cain”, in which he compared Bulgaria’s attack on Serbia to the biblical Cain’s attack on his brother, Abel. The poem was one of the few things that he carried with him in his knapsack as he made his journey over the Albanian mountains. Upon arriving at the Adriatic seashore only to see his fellow Serbs being thrown out to the sea for burial, he penned one of the most moving war poems of his generation: “Ode to a Blue Sea Tomb” or better known in Serbian as “Plava Grobnica” (simply translated Blue Graveyard). 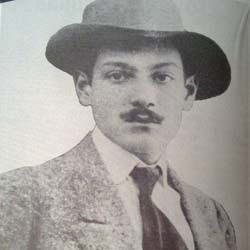