A poet, novelist and philosopher, Nuˁayma co-founded, along with Kahlil Gibran and others, the New York literary society known as the Pen League.
Nuˁayma completed his secondary education in the Baskinta school, studied at the Russian Teachers’ Institute in Nazareth and the Theological Seminary in Poltava, Ukraine. He moved to the United States where he received degrees in Law and Liberal Arts at the University of Washington and began his writing career in Walla Walla, Washington in 1919.

After graduation he moved to New York, where along with Kahlil Gibran and eight other writers he formed a movement for the rebirth of Arabic literature, the New York Pen League. He was the Vice President and Gibran was President. In 1932, having lived in the States for 21 years, he returned to Baskinta, where he lived for the rest of his life. He died of pneumonia at the age of 98 on February 28, 1988 in Beirut. 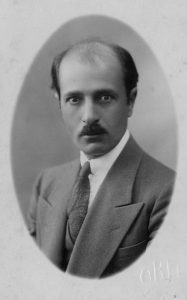