Franz Joseph I or Francis Joseph I (German: Franz Joseph I., Hungarian: I. Ferenc József, Romanian: Francisc Iosif, Slovene: Franc Jožef I., Italian: Francesco Giuseppe, Croatian: Franjo Josip I., Czech: František Josef I; 18 August 1830 – 21 November 1916) was Emperor of Austria and King of Hungary, and many others (see grand title of the Emperor of Austria) from 2 December 1848 until his death on 21 November 1916. From 1 May 1850 to 24 August 1866 he was also President of the German Confederation. He was the longest-reigning Emperor of Austria and King of Hungary, as well as the third longest-reigning monarch of any country in European history, after Louis XIV of France and Johann II of Liechtenstein.

After the Austro-Prussian War, Austria-Hungary turned its attention to the Balkans, which was a hotspot of international tension due to conflicting interests with the Russian Empire. The Bosnian crisis was a result of Franz Joseph’s annexation of Bosnia and Herzegovina in 1908, which had been occupied by his troops since the Congress of Berlin (1878). On 28 June 1914, the assassination of his nephew Archduke Franz Ferdinand in Sarajevo resulted in Austria-Hungary’s declaration of war against the Kingdom of Serbia, which was Russia’s ally. This activated a system of alliances which resulted in World War I. Franz Joseph died on 21 November 1916, after ruling his domains for almost 68 years. He was succeeded by his grandnephew Charles. 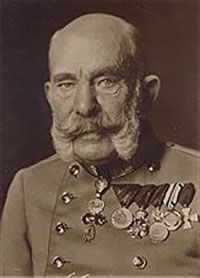