After graduation at the University of Ghent (Belgium) as a Master of Science in civil engineering with a specialization in probabilistics and risk analysis, Joris Blanckaert (°1976) started his studies at the Royal Conservatoire of Ghent, enrolling for a Bachelor degree (2005) in jazz accordion with Rony Verbiest and a Master degree (2007) in contemporary composition with Frank Nuyts.

Since 2009, he is working at a scientiﬁc research project (in collaboration with Flemish art house KC nOna) about realtime interaction between soloists and a computer model, based on spectral theory and statistics.

Joris is founder and artistic director of Muzi a Zeny vzw, a small artistic production collective.  As a life performer he plays Accordion and Life Electronics.  Since 2001 he has been performing with ensembles ‘bal des boiteux’ and ‘bOOmfanfare’ on national and international stages.

In 2010, his ﬁrst opera ‘L’Algerino in Italia’ has been created at MAfestival.  In 2013 he composed two new opera’s, “the Wandering Womb” (created in Music Centre De Bijloke Ghent) and “elle est moi und töte mich” (for 11 voices, created by Flanders Opera Studio). 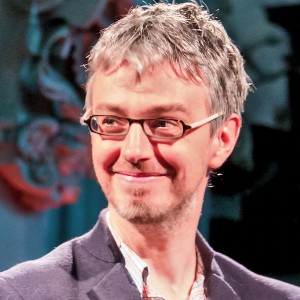