As a child, he sang as a chorister at Gloucester Cathedral, from 1900 to 1906, where he met fellow composer Herbert Howells who became a lifelong friend. He also enjoyed an enduring friendship with the poet F. W. Harvey whom he met in 1908. e studied there with Charles Villiers Stanford, who also taught Ralph Vaughan Williams, John Ireland, Marion M. Scott,Rebecca Clarke, Frank Bridge, Arthur Bliss, Howells and many others. Stanford told Howells that Gurney was potentially “the biggest of them all”, but he was “unteachable”. Gurney possessed a dynamic personality but had been troubled by mood swings that became apparent during his teenage years. He had a difficult time focusing on his work at college and suffered his first breakdown in 1913. After taking a rest, he seemed to recover and returned to college.

Gurney’s studies were interrupted by World War I when he enlisted as a private soldier in the Gloucestershire Regiment in February 1915. At the Front, he began writing poetry seriously, sending his efforts to his friend, the musicologist-critic Marion Scott, who worked with Gurney as his editor and business manager. He was in the midst of writing the poems for what would become his first book Severn and Somme when he was wounded in the shoulder in April 1917. He recovered and returned to battle, still working on his book and composing music including the songs In Flanders and By A Bierside. Sidgwick & Jackson accepted Severn and Somme in July with publication set for the autumn. In the meantime, Gurney was gassed in September the same year and sent to the Edinburgh War Hospital where he met and fell in love with a VAD nurse, Annie Nelson Drummond, but the relationship later failed. There remains some controversy about the possible effects of the gas on his mental health, even though Gurney had shown some signs and symptoms of a bipolar disorder since his teens. “Being gassed (mildly) [his parenthesis] with the new gas is no worse than catarrh or a bad cold”, Gurney wrote in a letter to Marion Scott on 17 September 1917. After his release from hospital he was posted to Seaton Delaval, a mining village in Northumberland, where he wrote poems including ‘Lying awake in the ward’. Severn and Somme, was published in November 1917.

In March 1918, Gurney suffered a serious breakdown, triggered at least in part by the sudden loss of Drummond. He was hospitalized in the Gallery Ward at Brancepeth Castle, County Durham, where he wrote several songs, despite the piano sounding, he said, like “a boiler factory in full swing because of the stone walls”. In June he threatened suicide but did not go through with it. He slowly regained some of his emotional stability and in October was honourably discharged from the army. Gurney received an unconventional diagnosis of nervous breakdown from “deferred” shell shock. The notion that Gurney’s instability should primarily be attributed to “shell shock” was perpetuated by his close friend Marion Scott, who used this term in the initial press releases after Gurney’s death, as well as in his entry for Grove’s Dictionary of Music and Musicians. 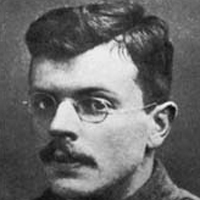