Isaac Rosenberg was born in Bristol, the second of six children and eldest son of his parents, Barnett (formerly Dovber) and Hacha Rosenberg, who were Orthodox Jews from Dvinsk (now in Latvia). In 1897, the family moved to a poor district of the East End of London, with a strong Jewish community. He left school at the age of fourteen and became an apprentice at a firm of engravers in Fleet Street.

He was interested in both poetry and visual art, and attended evening classes at the Birkbeck College art school. He completed his apprenticeship in 1911, and managed to find the finances to attend the Slade School of Fine Art at University College, London (UCL). During his time at Slade School, Rosenberg notably studied alongside David Bomberg, Mark Gertler, Dora Carrington, and others. He began to write poetry seriously, but he suffered from ill-health.

Afraid that his chronic bronchitis would worsen, Rosenberg hoped to try and cure himself by emigrating in 1914 to the warmer climate of South Africa, where his sister Mina lived in Cape Town. He wrote the poem “On Receiving News of the War” in Cape Town, South Africa. While others wrote about war as patriotic sacrifice, Rosenberg was critical of the war from its onset. However, needing employment in order to help support his mother, Rosenberg returned to England in October 1915, where he published a second pamphlet of poems Youth and then enlisted in the British Army.

Rosenberg was assigned to the 12th Battalion of the Suffolk Regiment, a bantam battalion for men under the usual minimum height of 5’3″ (ca 1m67). After turning down an offer to become a lance corporal, Private Rosenberg was later transferred to another bantam battalion, the 11th (Service) Battalion of The King’s Own Royal Lancaster Regiment. In June 1916, he was sent with his Battalion to serve on the Western Front in France. He continued to write poetry while serving in the trenches, including Break of Day in the Trenches, Returning we Hear the Larks, and Dead Man’s Dump.

Having just finished night patrol, he was killed at dawn on 1 April 1918; there is a dispute as to whether his death occurred at the hands of a sniper or in close combat. In either case, he died in a town called Fampoux, north-east of Arras. He was first buried in a mass grave, but in 1926, his remains were identified and reinterred at Bailleul Road East Cemetery, Plot V, Saint-Laurent-Blangy, Pas de Calais, France.

On 11 November 1985, Rosenberg was among 16 Great War poets commemorated on a slate stone unveiled in Westminster Abbey’s Poet’s Corner. The inscription on the stone was written by a fellow Great War poet, Wilfred Owen. It reads: “My subject is War, and the pity of War. The Poetry is in the pity.” 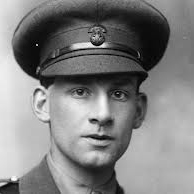