Hugo Ball (22 February 1886 – 14 September 1927) was a German author, poet, and essentially the founder of the Dada movement in European art in Zürich in 1916. Among other accomplishments, he was a pioneer in the development of sound poetry.

At the beginning of World War I, he tried joining the army as a volunteer, but was denied enlistment for medical reasons. After witnessing the invasion of Belgium, he was disillusioned, saying: “The war is founded on a glaring mistake, men have been confused with machines.” Considered a traitor in his country, he crossed the frontier and settled in Zürich, Switzerland. There, Ball continued his interest in anarchism and in Mikhail Bakunin in particular.

As co-founder of the Cabaret Voltaire in Zürich, he led the Dada movement in Zürich and is one of the people credited with naming the movement “Dada,” by allegedly choosing the word at random from a dictionary.  In 1916, Hugo Ball created the Dada Manifesto, making a political statement about his views on the terrible state of society and acknowledging his dislike for philosophies in the past claiming to possess the ultimate truth. The same year as the Manifesto, in 1916, Ball wrote his poem “Karawane,” a poem consisting of nonsensical words. The meaning, however, resides in its meaninglessness, reflecting the chief principle behind Dadaism. 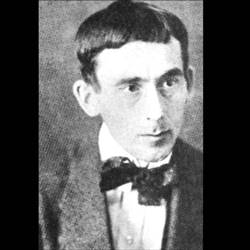