Composer Fabio Nieder was born in Trieste; he now lives in Germany. He studied chamber music with Dario de Rosa and Libero Lana, composition with Giulio Viozzi and piano with Roberto Repini at the Conservatorio Giuseppe Tartini in Trieste from 1973–81 and studied privately with Witold Lutoslawski in Groznjan, Croatia in 1977, on a scholarship from Jeunesses Musicales.

He taught analysis at the Università degli Studi in Trieste and has taught at the Conservatorium van Amsterdam since 2005. He has given lectures in Austria, Estonia, Germany, Italy, and Slovenia. His primary publisher is Casa Ricordi.

His new work Kriegslied will be performed by one of the Tenso choirs in the 18-19 season. 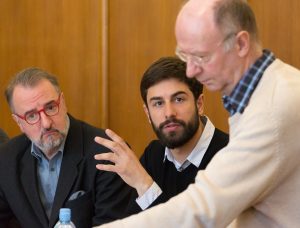