Ady was born in Érmindszent, Szilágy Country (part of Austria-Hungary at the time; now a village in Satu Mare County, Romania, called Adyfalva in Hungarian and Ady Endre in Romanian). He belonged to an impoverished Calvinist noble family.

He later studied law at the Reformed College in Debrecen. After finishing his studies, he became a journalist. He published his first poems in a volume called Versek (Poems) in 1899. He soon grew tired of Debrecen (the town later became the symbol of backwardness in his poetry) and moved to Nagyvárad (today Oradea, Romania), a city with a rich cultural life.

A turning point came in August 1903 when he met Adél Brüll (Mrs Diósi), a rich married woman who was living in Paris but visited her home in Nagyvárad. Léda (as he called her in his poems) became his Muse; his love for her and his visit to Paris, where he followed her, helped him to develop his talent. He visited Paris seven times between 1904 and 1911. When he returned after his first visit (which lasted for a year), he moved to Budapest and began work for the newspaper Budapesti Napló (Budapest Journal), where he had published more than 500 articles and many poems.

Being interested in politics, Ady became a member of the radical group Huszadik Század (Twentieth Century). In 1906 he published his third book of poetry, Új versek (New Poems), which is a landmark in literature marking the birth of modern Hungarian poetry. His fourth collection, Vér és arany (Blood and Gold), brought him real success and critical acclaim.

After the assassination of Archduke Franz Ferdinand in 1914, Ady saw that war was approaching. Everyone he knew was enthusiastic about the war, and he was left alone with his fears and worries about the future. He published his last book of poetry in 1918. He was terminally ill when he wrote his last poem, Üdvözlet a győzőnek (Greetings to the victorious). Syphilis had weakened his aorta, so that he might die at any moment from a massive haemorrhage. He was elected as president of the Vörösmarty Academy, an organization of modern writers, but could not deliver his opening speech; he died in Budapest on 27 January 1919. 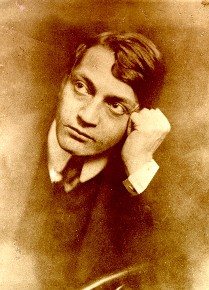