Edith Södergran (1892-1923) was a Swedish-speaking Finnish poet. She was born in St Petersburg (Russia) and lived on the Karelian coast, the part of Russia that (now) borders Finland.  One of the first modernists in Swedish-language literature, her influences came from French Symbolism, German expressionism, and Russian futurism. At the age of 24 she released her first collection of poetry entitled Dikter (“Poems”). Södergran died at the age of 31, having contracted tuberculosis as a teenager. She did not live to experience the worldwide appreciation of her poetry, which has influenced many lyrical poets. Södergran is considered to have been one of the greatest modern Swedish-language poets, and her work continues to influence Swedish-language poetry and musical lyrics. 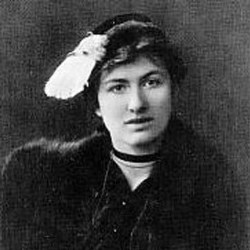