Albert-Paul Granier, an officer in the French artillery, wrote poetry which bears comparison with that of any other Great War poet.

He was mobilised on August 3, 1914 and saw action from the start, mostly in the Verdun region. By the end of the year, he had seen what modern warfare was to be: entire villages razed by ‘steel squalls of gluttonous thrusting shells’; columns of desperate refugees, ‘some dropping where they trudge, dead meat already’; massive artillery battles with ‘whole armies fractured, hacked and killed’; comrades killed by friendly fire, horses dragging guns through belly-deep mud…
From 1917 he was an air observation officer, radioing to the gunners on the ground where to direct their fire. In August 1917, his plane went down in flames; his body was never found.
Shortly before his death, he published a book of poems inspired by the war, “Les Coqs et les Vautours”.
Though praised in France at the time, the poems were lost for 90 years and have appeared for the first time in English this year: “Cockerels and Vultures” – translated by Ian Higgins, published by Saxon Books. 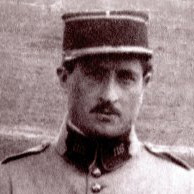